The Science Behind Biomed

Our Daily Digestive Support supplement contains an expert blend of friendly spore forming bacteria and the digestive nutrients turmeric and ginger. We pride ourselves in sourcing only the highest quality, clinically evaluated raw ingredients to go into our supplement.

LactoSpore® is Biomed’s bacteria of choice, and we want you to know exactly why we choose to use this particular strain in our Daily Digestive Support Supplement. LactoSpore® is a preparation containing the lactic acid forming microorganism (often called a “probiotic”) Bacillus coagulans MTCC 5856 or B. coagulans for short.

How does LactoSpore® work?

The human digestive tract contains around 400 different bacterial species that reduce the growth of harmful bacteria and promote a healthy digestive system. Lactic acid producing bacteria are by far the largest group amongst them all. 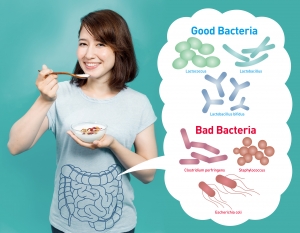 Given the pressures of a modern lifestyle, it can be a tricky task to maintain a normal, healthy and balanced microbial population in the digestive tract. In fact, most of us have a smaller variety of bacteria in our bodies than our great grandparents did.

From the foods we eat, to the medicines we take, and even increased stress levels our modern lifestyles mean that some of those good bacteria are being killed off.

Additional factors that might make this task even trickier are stress caused by sudden changes in food consumption patterns, exposure to environmental pollutants, extensive travel and unexpected changes in weather.

Therefore, under such adverse circumstances, the harmful bacteria may become predominant (a condition referred to as “bacterial overgrowth”) and create an imbalance or dysbiosis, which may in turn impair normal gut function and lead to various problems, ranging from inefficient digestion, diarrhoea, constipation and flatulence to severe gastro-intestinal disorders.

So what can we do to bring some of those health boosting bacteria back? A logical approach to restoring the balance of intestinal flora would be the use of naturally occurring microorganisms. A superior and potential species among Lactobacillus is Bacillus coagulans. This species forms spores, which on activation in the acidic environment of the stomach, can germinate and proliferate in the intestine, produce the favoured L (+) form of lactic acid and effectively prevent the growth of pathogens (harmful bacteria).

How Does LactoSpore® Arrive, Survive & Thrive?

LactoSpore®  is a sporebiotic; it is this spore-forming nature of these bacteria that makes them resistant to most chemical and physical conditions (e.g. acid and heat) and therefore they are able to survive manufacturing, shipping and storage with no loss of viable count.

Bacillus spores are naturally designed to survive digestion. The reason for their inherent survivability comes from their bi-phasic life cycle. This means that the Bacillus spores can transition interchangeably from their dormant form to their active form, depending on the environment. In its dormant spore form, Bacillus will surround itself with an endospore, which is a tough, natural outer shell that protects it from light, heat, pressure, acid, lack of oxygen, and other environmental factors. This key feature is what allows the strain to survive easily through digestion without the need for enteric-coated capsules or refrigeration. Other non spore forming bacteria such as Lactobacillus cannot survive the acidic conditions of the gut and are therefore rendered virtually ineffective.

Once settled in the intestines, Bacillus coagulans is able to survive and flourish through the mechanism of competitive exclusion. There is first a competition for limited nutrients by all bacteria, the acidic environment created by the production of lactic acid by Bacillus coagulans prevents the growth of pathogenic microbes and allows growth of Bacillus coagulans which ultimately dominate the microbiota. In addition, Bacillus coagulans also produces Bacteriocins (antimicrobial proteinaceous compounds) that are inhibitory towards both Gram (+) and Gram (-) bacteria.

LactoSpore® is Clinically Evaluated and Accepted Across the Globe

In 2016, Health Canada, the federal department which regulates products that help people of Canada maintain and improve their health, issued the following approved health claim for LactoSpore®

"When I say these capsules changed my whole situation with food/digestion I genuinely mean it. This brand never contacted me and they didn’t even know I would receive these capsules. I just genuinely have fallen in love with them and how they make me feel!  "

"The most fabulous boost - even my colonic therapist agrees and she's my toughest critic!"

"These have totally worked and been a saviour!"

"I've been using Biomed for months now and I have noticed a serious change since upgrading to these probiotics. My digestion has improved in so many ways, and my nutritionist is happy too! I love that it's free from all of the nasties that I like to avoid AND they're veggie friendly which a lot of live cultures aren't, which makes them the perfect fit for me and I won't be changing any time soon!"