I think we’ve all been there, rushing to the loo during the night (or day) because of a tummy upset caused from that dodgy kebab you had the previous night. Inflammatory bowel disease (IBD) is a life-long condition that comprises of either crohn’s disease or ulcerative colitis both of which have incredibly complex etiologies. Diarrhoea is one of the symptoms for IBD and its severity is dependant on the location and extent of inflammation within the gastrointestinal (GI) tract.

Diarrhoea is the term given to the increased amount of volume or frequency of the passing of loose or liquid stools in a rapid fashion of which the severity of it can be an indication to disease activity. Inflammation seen in IBD causes damage to the epithelial and mucosal structure of the intestines which impedes not only food absorption but water and solute transportation. Aside from IBD there are other causes of diarrhoea such as stress, medications and even the foods we eat. 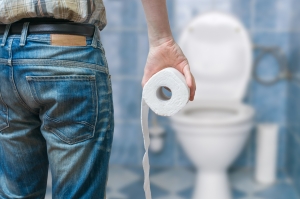 Some people may find that certain foods can ‘upset their tummy’ by causing the onset of diarrhoea, as some foods which are spicy or high in fibre can cause laxative effects. One way to identify foods that can bring on these symptoms is by keeping a food diary and noting down what you ate, the time you ate it, how much you ate and what symptoms you experienced later. This is one way in which people with IBD can identify trigger foods but can also be used by everybody if you feel certain foods are not agreeing with you. By identifying these foods you can then cut them out of your diet which will hopefully reduce the symptoms you experience, however it is best to use this method under the supervision of a qualified dietician.

If you don’t have IBD and suffer from diarrhoea after eating foods, there is a chance that you could be sensitive to gluten or even lactose intolerant. Gluten is a type of protein that is found in grains and if you are sensitive to it you could have coeliac disease, where your immune system reacts to the gluten and brings on your symptoms. People with IBD can also be sensitive to gluten and so going on a gluten free diet, supervised by your doctors and dieticians, can help to alleviate the symptoms of diarrhoea, bloating and stomach pains. Lactose intolerance is seen in the general population as well as in people with IBD and so people who have this intolerance tend to avoid dairy products. This is because dairy products contain the sugar called lactose and if you are lactose intolerant you lack the enzyme called lactase which is needed to break it down which causes it to remain in your gut where it is then fermented by bacteria. The by-product of this fermentation is gas which can cause you to experience bloating, stomach pains and in some cases diarrhoea. Avoiding food high in fibre can help in dealing with diarrhoea. There are two types of fibres: soluble and insoluble, both of which are an important part of a well-balanced diet. Reducing the amount of foods that contain high amounts of insoluble fibre can help to alleviate symptoms of diarrhoea as insoluble fibre does not absorb much water unlike soluble fibre. 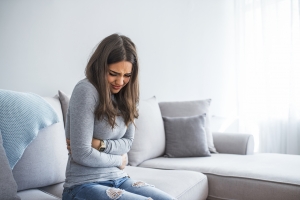 One of the most important things to do if you are suffering from diarrhoea is to stay hydrated. This is because diarrhoea can cause dehydration and the loss of electrolytes and so you may notice you can get a dry mouth/throat and feel thirsty. If you feel these symptoms while having diarrhoea it is important to consult your doctor for further advice, but in general you need to drink plenty of water. Try and stay away from caffeinated drinks as these can contribute to the dehydration process as can sugary drinks.

We are all different and have different preferences when it comes to the food we eat either because of the taste and smell of certain foods but also because we all have different food sensitivities. It is important to talk to your doctors before making changes or excluding foods from your diet as they will be able to refer you to dieticians to ensure that you will still get the essential nutrients your body needs to function.

Ziyad is a diagnostic radiographer obtaining first-class honours from St George’s University of London Medical School. He has previously obtained a BSc in biological sciences and an MSc in reproductive medicine. He was diagnosed with crohn’s disease in 2007 after spending the previous year experiencing symptoms. He created his blog The Grumbling Gut and dedicated his social media to raise awareness of inflammatory bowel disease.