Athletic Performance and the Gut Microbiome 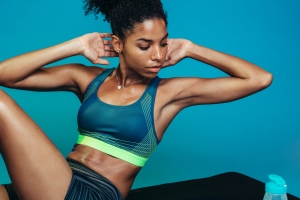 The gut microbiome is influenced by numerous biological and lifestyle factors such as genetics, antibiotics, the environment, diet and exercise. There is a lot of evidence to suggest that being physically active is beneficial to the make-up of your gut microbiota. Having a healthy and diverse gut flora with good digestion in terms of athletic performance will allow you to be able to optimally absorb adequate vitamins and minerals that you require in order to perform and recover.

Probiotics is the term used to label microbes that are good for us. They are live microorganisms delivered straight to the gut such as those in freeze-dried supplements but also in fermented foods such as (but not limited to) yoghurt with live cultures, kefir, sauerkraut, tempeh, kimchi, natto, crème fraiche, injera, dhokla. By ingesting probiotics, we are able to positively manipulate the gut microbiota. However, currently there is not a lot of research in humans to show the benefits of fermented foods, although that’s not to say that they aren’t beneficial to us, it just means we need more studies in this area. 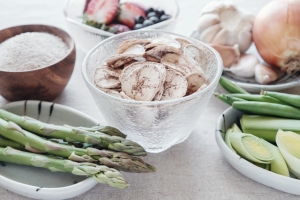 Prebiotics work like fertilisers in the gut to increase the growth and activity of the beneficial bacteria, primarily of the geneses of bifidobacterial and lactobacilli within the gut. Prebiotics include (but not limited to) onion, garlic, Jerusalem artichoke, chicory root, okra, fennel bulb, asparagus, leeks, apricots, dates, persimmon, watermelon, dried mango, almonds, barley, cashews, rye, spelt, legumes, chai tea, chamomile tea, silken tofu. However, you would have to eat abundances of these foods in the raw state to see a big effect and in fact consuming extra prebiotics in your diet can trigger gastrointestinal (GI) symptoms, particularly in those with IBS (irritable bowel syndrome). Therefore, for the majority of people, in order to feed your gut microbiota, you should just take advantage of the prebiotics that naturally occur in food.

However, from an athletic point of view, supplementation may be beneficial. Taking a prebiotic galactooligosaccharide may reduce severity and airway inflammation in asthma and exercise induced asthma. This is due to cross talk between the microbes in the gut, the airways and the immune system, labelled the gut lung axis that as well as playing a role in exercise induced asthma is also linked to inflammation in the airways and upper respiratory tract infections. Common symptoms that may occur in athletes may be wheezing, a cough, or cold and flu like symptoms.

Therefore, if you improve the immune tolerance of athletes to respiratory illness by the use of probiotics then you may be able to shorten the duration of the illness and or reduce the severity of the symptoms, which will in turn benefit the athletes performance. Recommendations include taking a multi strain probiotic that combines species from the genus’s Lactobaciullus and Bifidobacterium. 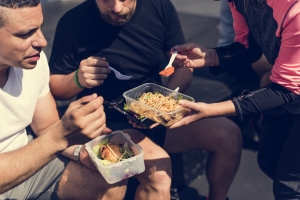 Athletes have very specific diets that can impact on the gut microbiota. Long term, high intensity exercise can affect the gut barrier and permeability and may be associated with GI symptoms in athletes. Up to 86% of athletes suffer with GI discomfort associated with training or competition such as diarrhoea (Pugh et al 2017). Four weeks of multi- strain probiotic supplementation has been shown to alleviate symptoms that are associated with endurance exercise and marathon running.

Research has shown that consuming probiotics can improve exercise performance in the heat. After probiotic supplementation (45 billion CFU of lactobacillus, Bifidobacterium, and streptococcus strains) runners in a study demonstrated their performance improved by 14%, although more research is needed in this area. This may be attributed to protection of the gut lining from damage which results in  improved digestion and allows the cooling system in the body to function at its best.

We don’t know exactly what type of probiotic strain or species we should be using for particular individuals and athletes as they all do different jobs and therefore it is very difficult to make specific recommendations on probiotics. However, when choosing a probiotic you must ensure that there is evidence that it benefits your symptoms, which microbes it benefits, the effective dose, duration of supplementation, probiotic survival and storage and how it should be consumed. 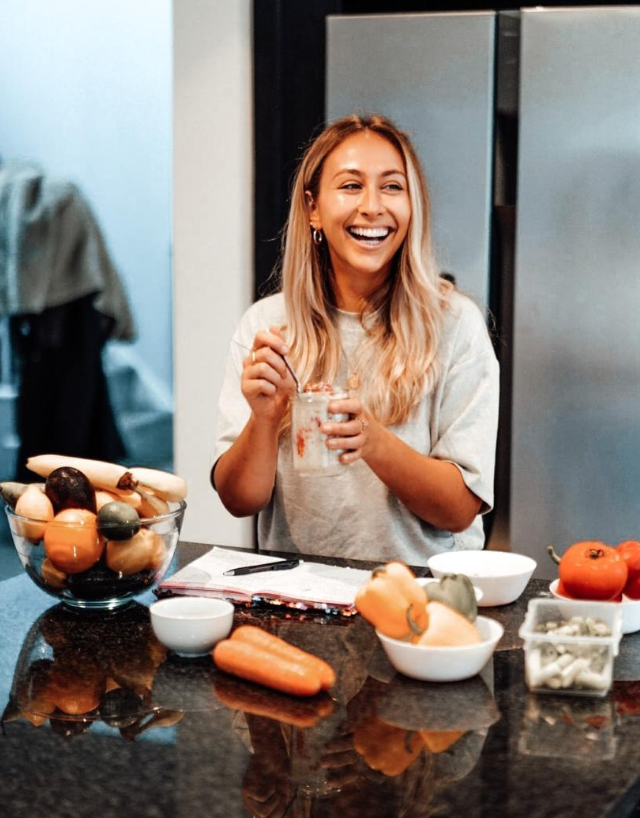 Emily Moreton is a Registered Associate Nutritionist with a Masters degree in clinical nutrition and public health and further studies in sports nutrition. Emily is also a registered nurse, however her main job is as a recipe developer and sports nutritionist for @strongandsxy, an app which creates personalised workouts and meal plans for women. When not working in the hospital, her day to day job includes creating and analysing recipes to enhance sports performance but also that fit in line with public health guidelines for the general population. Emily has a keen interest in the gut microbiota, which she wrote her dissertation on for her Masters degree and is interested in how this links to athletic performance, her current field of practice. Instagram handle @emilyrosemoreton